for the love of chickens,

my new coop, spent the summer building this and the runs I have. tried to make it as pretty as I could too. demensions are 8 by 8 by 8 feet. at first it was mostly a open front and side (facing south) the north side is completly closed in for obvious reasons. but a friend had a bunch of windows in his truck he was just throwing awya hence the windows on this side, allows me to see right into the coop from my landing on the steps and I can see down in when I use the bathroom at night. that way I can keep a eye onthem. the coop is as predator proof as I could make it. lots of  hardward cloth. insummer the one big window opens up and I will take down the white corrugated roofing thing in the window there. the front is complete open front

roosts and poop board, I tried using pine shavings unfortunantly it is hard to spot clean you end up having to take out a ton of it to get the poop out.  this you see is low dust kitty litter, just the clumping kind. I cleanit daily and the floor had this stuff but I found wet shoes make for mushy clay. so I dont use it on the floor but keep it bear right now but I screap it daily for get up the poop and mud dragged in. 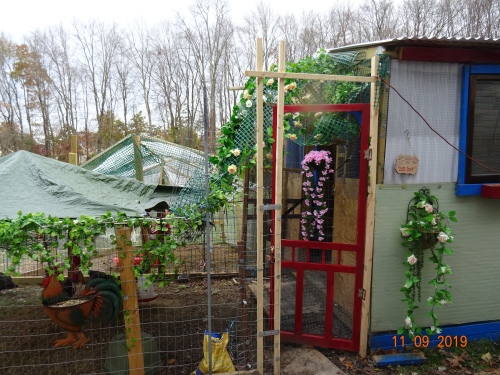 two of the runs I built covered in a frame and tarp. I have since changed the tarp on the first one putting a heavy duty large one to cover it completly because what I had on it as per the picture was not enought keep the rain out andkeep that main run dry. 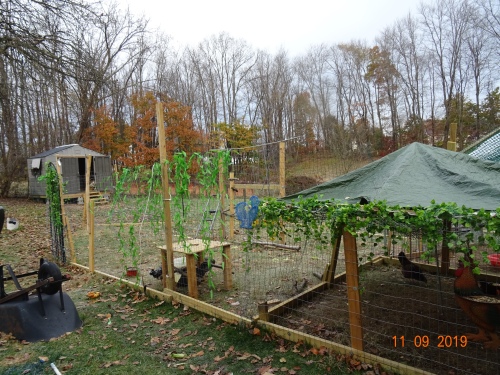 that is the third run bigger than the other two, because I know come bad weather the chickens wont be out foraging as much and I wanted them to have alot of room, I plan on framing it up reinforcing, (make it look better) and covering it with some kind of clear plexiglass or corrugated roofing, to make it weather and predator proof as possible and a automatic door is goin in next year so I am not forced to get up early in summer to let them out. I dont mind putting htme in at night just dont want to get up early. I also plan if able to put greenhouse plastic or old windows (my friend seems to always have them) to make it into a greenhouse chicken run, and put in small troughs for plants. of course it will be protected from very foraging chickens, lol it is still a work in progress my intentions predator proofing more, and making it look better and neater.